Maybe it’s a little early, but spring is in the air! What better way to capture all those special moments than taking a photograph? These days we have excellent cameras built right into our phones. Some people, though, prefer to use film cameras and develop the photos themselves. That process is more complicated than just the point-and-shoot method, but developing film into beautiful pictures is a combination of science and art. It would be interesting and fun to take a photography class!

At first look, you might think this Seneca tripod camera wouldn’t work anymore, but that is not the case, this tripod is still in working condition! You can view it at the Carriage Barn & Historical Museum at Heritage Park in Santa Fe Springs. This camera has three legs, which is why it’s called a tripod. A similar platform can be used for many film cameras now as well.

The Seneca Camera Co. was founded in 1895, and was the leading producer of cameras. This particular camera was patented on November 15th, 1904, by Seneca Manufacturing Co. It’s called the Seneca Improved View Camera* and was made to work just as well today as it did in the early 1900’s. Made of mahogany with brass hardware, the black pleating (called the “bellows”) was made so it could fold up and be more compact and therefore portable. The function of the bellows was to move the lens so the camera could focus. The large bellows on the Seneca camera means that it was able to extend quite far for the picture. Think of the amazing photographs this camera has taken!

There are quite a few historical photographs in the Carriage Barn Museum as well as scattered throughout Heritage Park.  They give us a glimpse of what life was really like in those moments in history. When you have a picture of someone or something in a certain place, it can help you remember that exact time so you don’t forget those memories. Make it a February goal to take more pictures, but remember to appreciate the experience too!

Old cameras like this are still available online for purchase to use or to collect, so even though you wouldn’t be able to use it, stop by and take a look at this wonderful work of history. 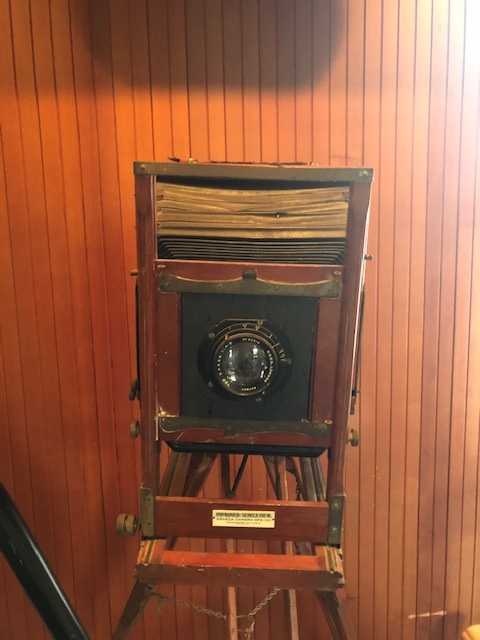